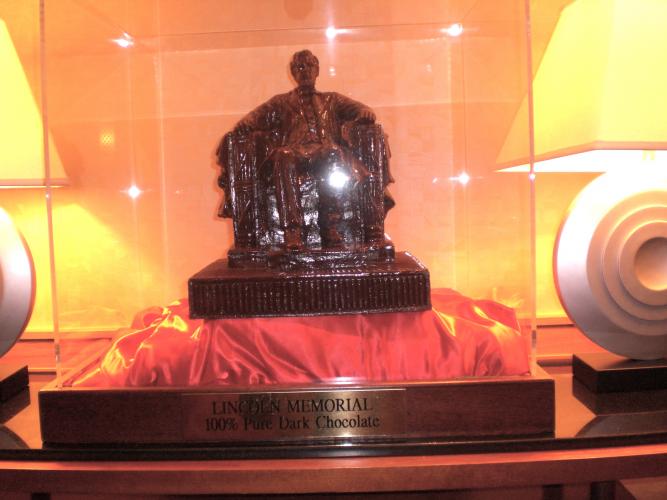 I was attending the Popular Culture Association/American Culture Association conference in Washington when this Lincoln Memorial sculptured in chocolate caught my eye. The hotel displays various D.C. landmarks (in dark or white chocolate) in showcases.

I've been thinking a lot about Lincoln since he found his way into my alternate history police procedural. Let me clarify that -- neither Lincoln, nor John Wilkes Booth, make a cameo appearance in my book. But because their paths did once cross here in Albany, New York, the historical Lincoln and historical Booth have become subjects for research. Of the two, Lincoln is the more complex and the more intriguing. In the name of research, I even went to see "Abraham Lincoln: Vampire Hunter." In case you missed the movie, Lincoln's skill in handling an axe is a crucial plot point. I have to admit, I did enjoy the movie's fictional relationship between Mary and Abraham Lincoln. But it is the historical Lincoln, as we know him from the records, who is of interest to me.

Before you ask, no, I have not seen Steven Spielberg's "Lincoln" yet. I have several good excuses. First, I hadn't found time to read Doris Kearnes Goodwin's Team of Rivals. I thought I should read the book on which portions of the film were based before seeing the movie. Then a friend, who is a historian and had seen the movie, advised seeing the movie first. But by that time, I had lost the momentum that would have sent me rushing to the theater, and I was buried in work. When I had time to spare, the movie was already gone from the local theaters. However, I am looking forward to curling up on my sofa with a bowl of popcorn and watching the movie on DVD.

One of the intriguing aspects of doing research on historical figures is sifting through the various accounts to find what seems to be the truth. For example, when Booth leaped from Lincoln's box at Ford's Theater to the stage below, did he break his leg or his ankle or merely sprain his ankle? Sources -- including professional historians -- disagree about the likely extent of Booth's injury. And then there was the myth-making that occurred in popular culture. When the commercial illustrators produced memorial scenes of Lincoln on his death bed, the number of visitors in the small boarding house room to which Lincoln had been carried increased over time. Dignitaries who were not there were added to the death bed scene. Holzer and Williams call this the "rubber room phenomenon".

Next week, I'll continue my discussion of Lincoln and historical myths and legends.