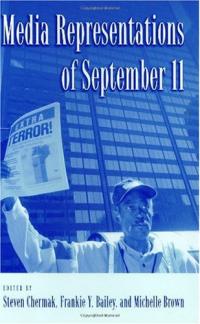 The terrorist attacks on September 11th were unique and unprecedented in many ways, but the day will stand in our memories particularly because of our ability to watch the spectacle unfold. The blazing towers crumbling into dust, black smoke rising from the Pentagon, the unrecognizable remains of a fourth airplane in a quiet Pennsylvania field―these images, while disturbing and surreal, provide an important vehicle for interdisciplinary dialogue within media studies, showing us how horrific national disasters are depicted in various media. Each contributor to this volume offers a fresh, engaging perspective on how the media transformed the 9/11 crisis into an ideological tour de force, examining why certain readings of these events were preferred, and discussing the significance of those preferred meanings.

Yet the contributors do not limit themselves to such standard news mediums such as newspapers and television. This anthology also covers comic books, songs, advertising, Web sites, and other non-traditional media outlets. Using a wide range of interdisciplinary approaches, contributors explore such topics as the amount of time dedicated to coverage, how the attacks were presented in the United States and abroad, how conflicting viewpoints were addressed, and how various artistic outlets dealt with the tragedy. Offering a unique approach to a topic of enduring interest and importance, this volume casts a new light on considerations of that day.