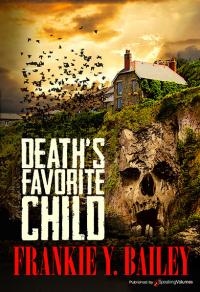 African-American, 38, a crime historian, Lizzie Stuart has spent most of her life in Drucilla, Kentucky. When her grandmother dies, Lizzie decides it is time for a vacation. She joins her friend Tess for a week in Cornwall, England, in the resort town of St. Regis. Lizzie finds her vacation anything but restful when she becomes an eyewitness to a murder and the probable next victim.

Rituals for the Dead and Dying. I'd scrawled those words across the yellow page of a legal pad one robins-chirping, tulips-blooming afternoon in May. That day, moving my hand across the page had been the only thing that had kept me from toppling over. The paperback thriller in my tote bag had stayed there, too intricate for my brain even if my eyes hadn't been filled with grit.

Rituals. During slavery, blacks on plantations often wrapped their dead in "winding sheets" and buried them at night. Laboring from sunup to sundown, the slaves spent their daylight hours performing their masters' tasks. Night was the only portion of the day that they could call their own. So that was when they buried their dead. Singing, carrying torches to light the way, they delivered the body to its grave.

Such processions puzzled, even frightened, the whites who observed them. Prone to their own superstitions, whites in the antebellum South understood better the "death watch" for the departing loved one and the "laying out" of the corpse.

They, white people, died of diseases and in childbirth. Black slaves died of the same causes and of hard work and abuse. Death was a constant presence in the lives of both groups. Death required rituals.

It still does. My grandmother, a descendant of field slaves, did her dying in a hospital room under medical supervision. But each day I drove back and forth to Lexington to keep my vigil at her bedside.

On the night that she died, I had lost my battle with exhaustion and fallen asleep in an armchair. Her voice jolted me awake. She had pushed herself upright in the bed. "Becca? Don't you play your games with me. I see you there."

I twisted around in my chair. For a moment, in that dimly lit room, I expected to see something there in the shadows.

"Becca, you stop your laughing!"

I had never heard Becca laugh. Neither one of us had laid eyes on Becca, my mother, in the thirty-eight years since my birth. But to the best of my knowledge she was still alive. Not a ghost to haunt her mother's passing.

I staggered to my feet. "Grandma? Shh, it's all right. Let me help you lie back down."

She turned her head and looked up at me. "Becca? What you come back here for?"

She grabbed my hand in an urgent grip. "It would kill your daddy if he knew. We can't never let him find out. We can't let nobody find out."

She groaned, rocking herself. "How could you do it, Becca? That man-" Her voice sunk to a whisper. "Oh, lord, baby. Becca, get on your knees and pray . . . pray for you and that child growing inside you."

She slumped against my arm. I held her for several heartbeats, then eased her back down onto the pillow.

She was dead. I knew that even before I pressed the button for assistance, even before a nurse rushed into the room to check her vital signs. Hester Rose Stuart was dead.

As for Becca-Rebecca, headstrong by all accounts, had been a few weeks short of eighteen when I was born. Five days after my birth, still without revealing the identity of my father, she had boarded a Greyhound bus and left town. Or so my grandmother had always told me.

In the days since my grandmother's death, I had been adjusting to living alone in the house that was now mine. Adjusting to silences filled with voices from my childhood. At around three that afternoon, I came to rest there in the kitchen doorway.

Silver-edged thunderheads loomed. I considered getting in my car and driving down to the Sheraton Hotel. I thought of sitting there in the lobby cafe sipping mint tea while the pianist played and the fountain tinkled, drowning out the storm raging outside. I thought of leaving home before the storm broke, but I kept on standing there in the doorway with that photograph in my hand.

It had been taken out by the old oak tree. My grandfather, Walter Lee, grinning that grin that people still mentioned when they spoke of him, faced the camera. He was ebony-skinned and lanky. Hester Rose, petite and pecan-colored, peeped around his shoulder. That afternoon, touched by some fleeting joy, she had dared risk one of her rare full-mouthed smiles. A hand had snapped the photograph and then it had been forgotten.

I had found the camera when I was searching the attic. After two hours of dust and spider webs, after finding nothing more significant about my mother than the paperback novels - Moby Dick, Jane Eyre, and The Scarlet Letter-that she must have been assigned in a high school English class, I had been about to give up. Then I'd opened a dented steamer truck. The camera was buried beneath a pile of moldy sheets. When I realized it contained film, I ran downstairs to change. Half an hour later, I was walking into a camera store in Lexington. There among the prints of house, flower beds, and vegetable garden had been that single photograph of my grandparents, the proud homeowners.

Both dead now. He of a heart attack, years ago when I was at graduate school. She at a little after midnight on June 1, the combined effects of hip surgery, diabetes, and a virulent strain of pneumonia-and perhaps whatever it was that had kept her mouth tight and her eyes wary.

Lightning zigzagged across the sky. I stepped back into the kitchen and let the screen door bang shut.

When I was a child, I had been sure God was Zeus, with lightning bolts that he flung down at people who had been bad. I shared this with my grandfather during one of our tramps through the woods, and he laughed until tears streaked his cheeks.

Seeing my chagrin, he hugged me to his side. "Lizzie, if that was the way of it, child, you wouldn't be able to walk after a storm for all the dead folks you'd be stumbling over." That might be true, but all these years later I could still have gone for a very long time between colliding weather fronts.

Lightning flashed. Thunder cracked and boomed, shaking the house. I clutched my grandparents' photograph and scrunched myself tighter into a corner of the flowered sofa. The shutter on one of the upstairs windows was loose and banging. Rain slashed against the picture window in the living room. I huddled there on the sofa, mumbling an apology for being ungrateful for what I had. An apology for being angry because I was without kin.

God did not strike one dead for having wicked thoughts. If that were the case, I'd already be dead.

I was astraphobic, brontophobic. Scared of storms. One of those silly childhood fears I intended to outgrow someday soon. The upstairs shutter banged like a gavel in the hand of an irate judge.

"All right, you're being ridiculous. One hundred, ninety-nine, ninety-eight. First thing tomorrow, find a repairman to fix the shutter. Ninety-seven, ninety-six. I am calm and relaxed. I am-"

White light exploded into the room. I screamed. I thought I was dead. But it was the tree. The old oak tree in the backyard had been struck by lightning. Blasted to its roots. Hester Rose, my grandmother, would have said it was an omen. A "sign." But a sign is only useful if you know how to read it. At any rate, it was a moment of transition. Not dying was amazingly therapeutic.